With the increasing emergence of green energy from wind and solar power, the center of gravity within the transformer industry has been slowly shifting from large power transformers to distribution transformers. Simultaneously regulatory bodies, such as the Department of Energy, have introduced new minimum level performance requirements so that design changes are enacted to increase efficiency ratings. “Greener” energy generation will also require “greener” energy distribution. More information on efficiency regulations and the importance of high accuracy loss measurements can be found here.

The DTTS allows for a high testing throughput in conformity with IEEE C57.12.90, without compromising quality. This system has been designed to allow fast automated test procedures with minimal manual intervention, avoiding human errors.

All models of the DTTS – Distribution Transformer Test System are 3-phased models, capable of testing both dry-type and oil-filled distribution transformers up to 500, 2500, or 5000 kVA. The optional extended lower current and voltage range makes the measurement system ideal for loss measurement testing the new generation of high efficiency transformers. 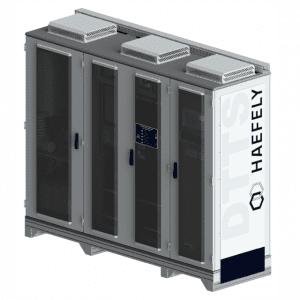 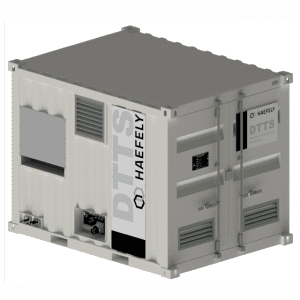 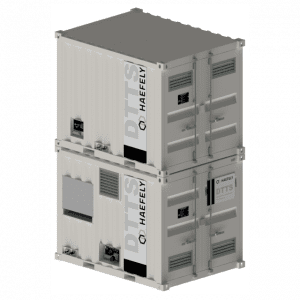 A state-of-the-art frequency converter front end allows the DTTS – Distribution Transformer Test System to be smaller, quieter, more flexible, and maintenance free compared to a traditional motor generated based system. Testing at any frequency between 50/60 – 200 Hz is possible for induced testing and partial discharge testing using the DDX 9121b Digital Partial Discharge Detector. The low system noise of the frequency converter makes it ideal for highly sensitive PD measurements.

It is very important to note that standards do not qualify power loss measurement based on any single measurement components. The true overall system uncertainty certification requires all components, including the CTs and PTs, to be taken into consideration. This is what separates the DTTS – Distribution Transformer Test System in terms of accuracy from other transformer test systems, it is a completely calibrated and certified measurement system.

A specialized control loop between the electronic power supply (frequency converter) controller and the TMS with active harmonic compensation regulates the THD to be ≤ 5% and also regulates the symmetry of the output voltage and current, even on highly non-linear loads.

A very noisy current signal will have significant effects on overall measurement accuracy. The unique EPS controller within the DTTS – Distribution Transformer Test System compensates highly non-linear loads in real time to ensure the most accurate measurements are still being conducted.

Completely automated test sequences can be run from a single computer with all results reported in a single document.

All routine tests are supported by the APSW application software, including:

The DTTS – Distribution Transformer Test System is designed to use minimal footprint on your factory test floor with all equipment being housed in a 9 ft container. If needs change in the future and higher testing capability is required, an upgrade can be conducted by adding the HV compensation container to the top of the existing system, preserving precious test floor space.

Compact, trolley-based system allowing winding resistance, transformer turns ratio, and insulation resistance tests. The WA 2293 Winding Analyzer built into the trolley also allows for the optional heat run test to be conducted. The included laptop with control software allows for easy operation of the tests and sends all data via WIFI to the DTTS Master PC for the generation of automated reports.

The low system noise of the frequency converter and active, real-time THD and symmetry control allows the DTTS – Distribution Transformer Test System to also be used for highly sensitive PD measurements, using the DDX 9121b Advanced Digital Partial Discharge Detector. Equipped with appropriate low and high voltage filters and coupling capacitors, sensitive 3-phase PD measurements can be conducted with a system noise level ≤ 5 pC. The DDX 9121b is also capable of measuring Radio Interference Voltage (RIV) according to the latest standards of NEMA and CISPR.

The DTTS – Distribution Transformer Test System is highly configurable to allow for maximum testing throughput for all routine tests in a production environment. Depending on the testing needs of the customer, the system can be configured into multiple individual test bays, with centralized controlling and reporting into one single test report. This significantly reduces testing times down to a few minutes per distribution transformer.

An independent AC dielectric test set, controlled by the DTTS Master PC, would be used for single phase applied voltage testing and configured next to the DTTS.

The independent Low Power Test Bay would be used for winding resistance, transformer turns ratio, and insulation resistance tests. The included laptop would control all low power tests and submit the data via WIFI to the DTTS Master PC.

Contact one of our dedicated HV sales engineers at (703) 365-2330 or hvsales@hvtechnologies.com today for more information on the DTTS – Distribution Transformer Test System.

Contact us for scheduling a remote demo of the complete system at Haefely’s factory!

In Case You Missed It